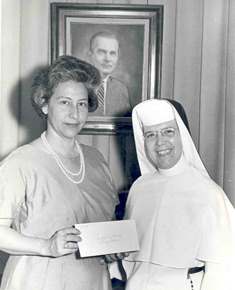 Lorraine Rose Miller graduated from Barry College in 1945. She had been active in the Sodality during her college years and had been editor of the Angelicus, the student newspaper. This publication received first class honor rating from the Associated Collegiate Press when Lorraine was editor. She also assisted with publicity for the college. She was chairman of the Barry College Teachers' Club, participated in college dramatics, and was active in civic and social functions. After graduation, Lorraine taught in the public school system and later became principal of Coconut Grove Elementary School. She played a prominent role in the Barry College Alumni Association in the early days and was chairman of the Living Endowment Fund Drive in 1964-65.

This scrapbook consists primarily of newspaper clippings along with programs from a variety of college functions. The newspaper articles provide a wealth of interesting information about college life in the early 1940s, and there are articles attesting to the high regard with which the first Catholic college in Florida was held.

Access Restrictions: The scrapbook is not in good condition, restrictions may apply.

Processed by: Sr. Arnold Benedetto, 2008. Revised by Ximena Valdivia with the assistance of student Jennifer Pena, 2013.