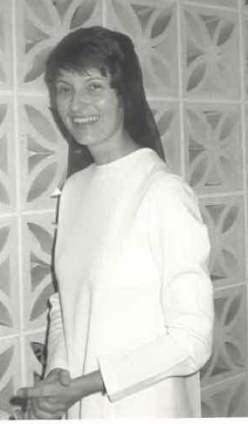 Today is August 10, 1989. I am Sister Eileen Rice in Nadin Hall, Adrian Michigan and I have with me Sister Beverly Bobola.

Sister Eileen: Sister Beverly, where were you born?

Sister Beverly: I was born in Hamtramick, Michigan on August 13, 1940. Sister Eileen: Tell me about your education.

Sister Beverly:  I went to school to St. Lawrence school in Michigan, we belonged to St. Lawrence parish, my parents and my two brothers and my two sisters. I was in the first graduating class from St. Lawrence high school in June of 1958.  From there I went to Siena Heights College for one year and then I entered the Dominican Congregation in June of 1959. I received my Bachelor of Arts degree in 1965 in English and with a minor in Latin and music. Then I went on to get a Master's of teaching business subjects at Western Michigan University in Kalamazoo Michigan. I had done some preliminary work however, at DePaul University in Chicago.

Sister Eileen: How did you hear about Barry?

Sister Beverly: I heard about Barry from our Sisters after I had entered the convent. Before that, I was not aware of Barry, just Siena Heights, or if I were aware of it, it didn't make an impression.

Sister Eileen: Why did you happen to go to Barry?

Sister Beverly: I was teaching at Rosary High School in Detroit and the school was closing because of a decrease in enrollment. Sister Judith Shield called me in the Spring of 1984 and asked if I would be interested in coming to Barry.

Sister Eileen:  How long were you at Barry?

Sister Eileen: Describe the atmosphere on campus when you were there.

Sister Beverly: Well, when I first went to Barry, we were an all girls school, an all women college. I found it absolutely delightful. I loved the grounds, the foliage, I loved it from the minute that I stepped on its grounds. I had been interviewed by Sister Dorothy Browne and as that was her last year, Sister Trinita Flood was the president when I arrived on campus. I found everyone very friendly. Sister Judith was most kind in helping me to adjust to college life and college teaching. I lived in Weber dorm. I was the only Sister in that dorm at that time. I found everything very pleasant and everyone most congenial, most willing to help me to make the adjustment that I needed to make.

Sister Eileen: Who was the Chaplain then?

Sister Beverly: Father Neill McDermott was the Chaplain when I went to Barry and Father Burke was there also at the time, and Father Dan Maddin.

Sister Eileen: Would you describe the curriculum a little?

Sister Beverly: Well, when I first went to Barry, the School of Business was just a department and we were under Sister Rita Schaefer. I believe the next year we were under Dr. Cote' and then the following year, the department became a school if my memory serves me well. Then Dr. Bill Morale was the Dean of the School of Business. The purpose of my being called to Barry was to try to increase the enrollment in the business education area of the School of Business, to teach future business teachers methods, classes, and help the School of Education in observing these students in their internship time. The time that I spent there, I did build up the program. We had a healthy enrollment in that area and then the enrollment declined. However, I also taught the subjects of typing and shorthand, office administration, business machines, transcriptions, and all the subjects that were in that area.  I was also involved in Bread for the World and I belonged to different committees, the Social Committee, Academic Affairs. I was responsible for most of the time I was at Barry for the Ushers, the ushers that served in the Auditorium or special events.

Sister Eileen: Would you describe how you saw Sister Trinita Flood as president?

Sister Beverly: As president I think Sister brought integrity to the position. I felt that everyone respected her highly. I found her fair, interested in both the students and the faculty, present all the time.  She was present on campus, no one ever had to look for her, she was present. Everyone seemed to like her and found her approachable.

Sister Eileen: Would you comment on the religious life on campus?

Sister Beverly: Well, for me religious life was a little bit different from what I had been used to from living in a convent. I soon adjusted to that. We met for prayer and meals and we had different Masses on campus, so the Sisters attended different Masses. I think for the situation as it was, teaching on a college campus and also living there, I think that the Sisters made strides to be together as a group whenever possible, but I also learned one met another Sister on campus, it didn't matter what you were doing, you would see somebody, so there was always contact with other Sisters.

Sister Eileen: What about the religious life of the students?

Sister Beverly: Yes, I had several of those students when they finished the ELS program in Shorthand and Typing and I can recall being amazed at how much English they had learned. Then I also assisted that program in tutoring the students that I didn't teach to acquaint them with terms of the business world. I tutored them for a couple of semesters.  I would take them as a group and we would just talk informally.

Sister Eileen: Did you ever experience the Pope? Did the Pope come down to that area?

Sister Beverly: No, I had left by that time, but the Pope on his way from South America, I believe, was stopping in Freeport in the Bahamas. Father Burke had wanted to go and see him. They were just going to stop to re-fuel the plane and Father Burke had asked if I would like to go along with him to see the Pope. I was ecstatic. I was so excited. So, we flew over on one night and the Pope was supposed to appear in this small little stadium around 7:30 or something and then there was some delay and he really didn't appear until like 1:30 in the morning. We stayed there with all those people. They had sent some of the children home because they were getting tired, but the rest of us stayed and we saw the Pope. Of course we were behind the gates because we didn't have any type of tickets or anything, but then as the Pope toured the stadium, this little pick-up truck came around to where we were sitting behind the gate, behind the screen.  We got out and Father Burke really got a good shake of the hands and all I managed was a touch of his cuff. That was exciting and then I stayed with the Bahamian Sisters that night, it was a very short night.  Father Burke stayed at the hotel and then the Sisters took me to meet him in the morning at the plane.

Sister Eileen: Tell me about what you consider to be the strengths of Barry as you saw them when you were there.

Sister Beverly: I think one of the main strengths was that there was personal care for each student. At least we tried to be as interested and as caring for each student as we could be. Sometimes the student didn't want all that personal attention and they balked at that, but I think the faculty was aware that the student was paying a high price to get their education and so we wanted them to be able to get as much as they could get. I think they were all encouraged as much as could be to take on leadership roles, but that always wasn't effective.

Sister Eileen: What would you say was the greatest weakness at Barry?

Sister Beverly: Let me see, the greatest weakness. Well, I felt that when the college became co-ed, I felt at that point that letting all the male students, I did not know them as well or even got to know them as well as I had known the female students. I felt growth and I felt that perhaps we were losing our personalism at that time.  The male student population just seemed to grow and then I felt that at that time, there was a real weakness in Academic Affairs. I felt that the life in the residences was not closely monitored as perhaps I would like to have it monitored because there was destruction.  It seemed to me at that time that standards were lowered in the residence halls and they just weren't upheld.

Sister Eileen:  Who was the Dean of Students?

Sister Beverly: Sister Linda was there when I first came, but I can't recall when she left. Then it was Dr. George Wanko.

Sister Eileen: When you started to leave Barry.

Sister Beverly: The choice to leave Barry was not my own entirely. As I mentioned, the department of Business Education which wasn't the School of Business was starting to decline in enrollment. The students were opting to major in accounting, in marketing, in management because as they said, "That's where the bucks were." And when students who were pursuing classes in business education realized how much work would be involved in teaching and planning, their salaries weren't going to be as high as those in marketing or in accounting. They decided to switch majors. When they decided to switch majors, we lost enrollment in the Business Education area and the enrollment was declining. It seemed also at that time that students who had taken one or more classes in computer wanted to pursue that. The demand for that was greater than Business Education and so that area was finally dissolved and Computer Education was put in its place. That really boomed, but that was before I left.

Sister Eileen: Is there anything else that you would like to say about your time at Barry?