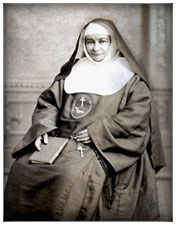 © Sister of St. Joseph of Peace 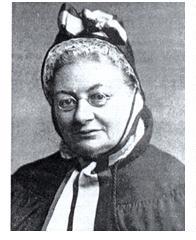 Title: Studies on the life/work of Margaret Anna Cusack

Creator: WATT, Women at the Table

Abstract: Studies on the life/work of Margaret Anna Cusack is a collection of volumes published by Women at the Table (WATT). Studies aim to make Margaret Ann Cusack works known and available to the scholarly and general public and to contribute to the knowledge and understanding of her life and work.

Born in Dublin, Ireland, May 6, 1829, Margaret Anna Cusack was raised in the Anglican Church tradition until her conversion to Catholicism in 1858. She entered the Irish Poor Clare Sisters and was among the first group of Sisters sent to found the convent at Kenmare, Co. Kerry.

During the next 21 years, Cusack, now known as Sister Francis Clare, dedicated herself to writing. Lives of the saints, local histories, biographies, books and pamphlets on social issues, letters to the press - all testify to her amazing industry and the wide range of her concerns. As the “Nun of Kenmare” she wrote on behalf of the liberation of women and children who were victims of oppression. Income from her books and from her famine relief fund was distributed throughout Ireland. While doing all she could to feed the hungry, at the same time she campaigned vigorously against the abuse of absentee landlords, lack of education for the poor and against a whole system of laws which degraded and oppressed a section of society.

To broaden the scope of her work Cusack moved to Knock, Co. Mayo in 1881 with the idea of expanding the ministry of the Poor Clares. She started an industrial school for young women and evening classes for daytime land-workers. Several women were attracted by this work and in 1884 she decided to found her own community, the Sisters of St. Joseph of Peace.

Under Cardinal Manning and Bishop Bagshawe, she received approbation for the new religious order from Pope Leo XIII and the Congregation of the Sisters of St. Joseph of Peace was founded in January, 1884, in the Diocese of Nottingham, England.

Later, Margaret Anna traveled to the United States to continue her work with immigrant Irish women. New Jersey stretched out a hand of welcome and encouragement as Bishop Wigger of the Diocese of Newark invited her to establish homes for young Irish working women there.

Physically exhausted, sick and disillusioned with the Church, in 1888 Margaret Anna Cusack withdrew from the Sisters of St. Joseph of Peace. She eventually returned to her friends in the Church of England. She died, June 5, 1899 and was buried in the cemetery reserved for the Church of England at Leamington, England.

Source: Congregation of the Sisters of St. Joseph of Peace, 2014. http://www.csjp.org/roots/historyfounder.html

Women at the Table (WATT), co-founded and co-directed by Rosalie McQuaide, csjp and Janet Davis Richardson, csjp, began in 1999, to respond to the Acts of the 20th General Chapter of the Sisters of St. Joseph of Peace, which encouraged its members to reflect on the life and charisma of Mother Clare.  It builds upon the work of Peace Sisters Dorothy Vidulich, Rosalie McQuaide, Margaret O'Neill, Joan Ward, and Catherine O'Connor.  Studies on the Life and Work of Margaret Anna Cusack are an opportunity for a new generation to discover the lifework of a woman who was a significant figure in 19th-century Ireland, England, America and beyond.  WATT brings out the complexity of Mother Clare's lifework and its sometimes paradoxical relationships with ecclesiastical and social traditions. It reassesses her place in her times and brings out her links with her contemporaries. In this way, it gives keys to understanding this leader with her multi-faceted oeuvre, her founding of a religious community of women, her participation in the women's movement, and the consequences for history.