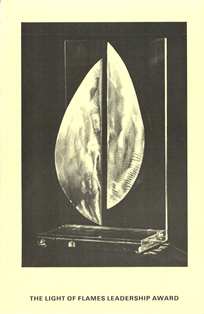 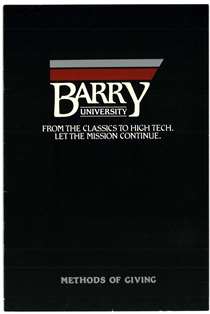 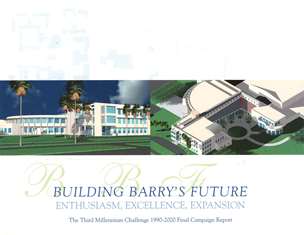 In 1964 the Development Division was created as a significant resource of active support to increase viability to the College.

A Board of Governors for Development was created on Feb. 1979, with the purpose of serving as the primary support structure for the Development Division. The group was expected to become very active in generating ideas and in personal involvement toward strengthening the base of Barry College. Responsibilities and objectives of the Board included [1] to serve as an advisory group to the Vice President for Development in consideration of development planning and projects relative to programs, events, and fund raising activities, [2] to participate in fostering and developing new sources of corporate and individual financial support, and [3] to recommend ways and means to assist Barry College in attaining its short and long range objectives.

On June 1, 1987 the Development Division was reorganized into the Division of Institutional Advancement which consisted of the following departments: Alumni Affairs, Records, Capital Campaign and University Relations.

The Mission of IA was to support the mission of Barry University through all forms of development to (1) enhance quality academics by increasing funds available for programs, scholarships, endowments, capital and operating expenditures, (2) to add to the caring environment by establishing a spirit of service to administrators, faculty, staff, alumni an students and (3) to provide community service to Greater Miami by active participation by members of the division in appropriate organizations.

This collection documents the history and administration of the Division of Institutional Advancement. Records include administrative files, publications, information about the departments in the Division, and memorabilia. Included in Events Services are files of President’s Dinner from 1972-1989 and Starlight Balls, from 1978-1988, but most important, Founders Day since 1942 to the present,

Photograph and audiovisual materials related to Events can be found in Barry University Photograph Collection and Audiovisual Collection.

The collection is organized into two series

Series I: The Division

Sub-Series B: Grants and Sponsored Programs

Series I: The Division

Board of Governors for Development

Sub-Series B: Grants and Sponsored Programs

South Florida Unites- One Peace at a Time 1987

6A       The Founders- Biographical information

Access Restrictions: This collection is open for research, some restrictions may apply