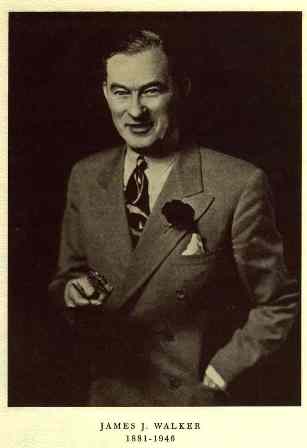 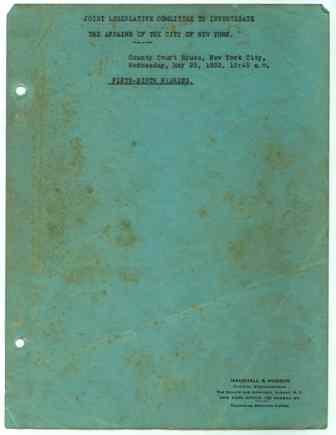 Joint Legislative Committee to investigate the affairs of the City of New York. [Transcript], 1932

Abstract: The bulk of the collection consists of photo albums and scrapbooks documenting the trip of New York City Mayor, James J. Walker, and his wife to Europe during 1926-1927, and the reception held at their arrival.

The son of Irish Catholic immigrants who lived in New York’s Greenwich Village, Walker attended Saint Francis Xavier College and graduated from New York Law School in 1904. After graduation, however, he began frequenting Broadway’s theatres and vaudeville, writing popular songs and eventually marrying (in 1912) a musical comedy singer. In that same year he was admitted to the New York State bar.

Already gravitating toward politics, he became a district captain and a member of the Assembly (1909) and, under the tutelage of Alfred E. Smith, was elected to the State Senate (1914). With the backing of the Tammany organization and Governor Smith, Walker was nominated in 1925 as the Democratic mayoralty candidate in the primary elections. He served as mayor of New York City for two terms. During his first term he created the Department of Sanitation, brought about unification of the city’s public hospitals, and made considerable improvements in the playgrounds and park systems; and, under his guidance, the Board of Transportation approved contracts for the construction of an elaborate subway system.

Reelected to office in 1929, he came under critical fire from several sources. In 1931 the New York legislature formed a committee to investigate the affairs of New York City. As a result of this investigation, extensive corruption was revealed and 15 charges were leveled against Walker. Accused, among other things, of being actuated by improper and illegal considerations and of being unable to explain satisfactorily the large sums of money deposited in his bank account, he resigned on Sept. 1, 1932.

He then went to Europe with his showgirl-mistress and did not return to the United States until 1935. He was named chairman of the National Cloak and Suit Industry in 1940; he later became the president of the Majestic Records Company.