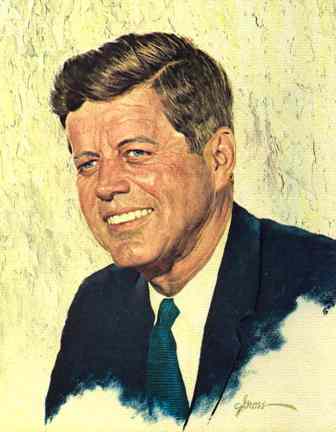 Abstract: The collection consists of materials collected by La Verne Maher to document John F. Kennedy presidency and assassination, as well as the Kennedy Family participation in American politics at that time. The collection includes correspondence, scrapbooks, memorabilia, magazines and newspapers, and books.

Of Irish descent, Kennedy was born in Brookline, Massachusetts, on May 29, 1917. Graduating from Harvard in 1940, he entered the Navy. In 1943, when his PT boat was rammed and sunk by a Japanese destroyer, Kennedy, despite grave injuries, led the survivors through perilous waters to safety.

Back from the war, he became a Democratic Congressman from the Boston area, advancing in 1953 to the Senate. He married Jacqueline Bouvier on September 12, 1953. In 1955, while recuperating from a back operation, he wrote Profiles in Courage, which won the Pulitzer Prize in history.

In 1960 Kennedy was a first-ballot nominee for President. Millions watched his television debates with the Republican candidate, Richard M. Nixon. Winning by a narrow margin in the popular vote, Kennedy became the youngest man elected President and the first Roman Catholic.

Responding to ever more urgent demands, he took vigorous action in the cause of equal rights, calling for new civil rights legislation. His vision of America extended to the quality of the national culture and the central role of the arts in a vital society.

On November 21, 1963, President Kennedy flew to Texas to give several political speeches. The next day, as his car drove slowly past cheering crowds in Dallas, shots rang out. Kennedy was seriously wounded and died a short time later. Within a few hours of the shooting, police arrested Lee Harvey Oswald and charged him with the murder. On November 24, another man, Jack Ruby, shot and killed Oswald, thus silencing the only person who could have offered more information about this tragic event. The Warren Commission was organized to investigate the assassination and to clarify the many questions which remained.

The collection is a valuable resource for the study of the presidency and assassination of John F. Kennedy, 1961-1963, as well as for the study of the American history and politics by that time. The bulk of the collection consists of published materials -books and periodicals- related to the assassination of JFK, the collection also includes political collectibles from JFK 1960 presidential campaign and presidential inauguration day as the 35th President of the Unites States.

This collection is organized into 4 series based on type of document. Books have been catalogued and put into the library system to be easily searchable; nevertheless a bibliography of the books included in the collection may be found at box Bibliography

This series contains correspondence from JFK and others to the Maher family, and printed materials associated to Kennedy, such as postcards, pamphlets and flyers. Materials are arranged in chronological order by date

Includes portraits and slides of JFK and photo shoots from his tomb.

The bulk of this series contains articles and clippings published in magazines and newspapers the following days to the assassination of President Kennedy. It contains special issues dedicated to the memory of JFK. This series also includes articles about others Kennedy family members.

This sub-series contains 15 Scrapbooks kept by LaVerne Maher, from September 1963 to January 1975, to document John F. Kennedy’s last days and consequences of his assassination. These scrapbooks contain newspaper clippings, printed materials, coins, postcards, and photographs. Materials are arranged in chronological order by date.

Twelve-inch vinyl records (33 1/2 RPM record) containing memorable speeches by JFK and tributes to him. Records are arranged in alphabetical order by record title.